Aaron Grady is U13 Lions Soccer Player of the Year 2014 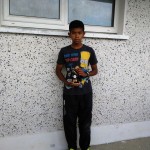 Earlier this week Durrow.ie spoke to Aaron Grady of Seandoire, Durrow who was awarded the U13 Soccer Player of the Year 2014 with the Lions FC club in the town. Aaron highlighted firstly, the two games played as part of the FAI league as his favourite part of the year citing the great experience garnered as it was the first time the team had took part. He was also quick to highlight secondly, the final league game which they won as also being very satisfactory for him and his team mates.

Aaron was keen to point out that simply being on the team meant a huge amount as the competition for places in the starting eleven is intense, even at this young age level. He felt good about the year as a whole – “the hard work was put in and it has certainly paid off… alot goes in to it, from training to the many, many games played throughout a season.”

When asked about being awarded the U13 Player of the Year, Aaron said “it was a good feeling to get the award, hopefully it won’t be my last!” Already looking forward to next year, Aaron cannot wait for more intense games, but alluded that training will also be more intense so he won’t be sitting on his laurels – the hard work will have to be put in all over again.

Being part of the team is thoroughly enjoyable he notes, the lads are a great bunch and we all get on great, having the criac and enjoying what we do – “everyone is in it for the team, it’s what it’s all about.” Aaron reveals his favourite position on the team is left of midfield – “I like to cut in on my right and shoot, but I can play left back” – certainly food for thought for this year’s manager!

We all wish Aaron a big congratulations on his award and the best of luck in the new season ahead. No doubt he keeps his mother Caroline proud watching on from the sidelines at the many games throughout the year. Who knows, maybe in a few years time we may even get to see Aaron pull on the green shirt for Ireland – he certainly is on the right path, keep it up young man.

Photo: Aaron Grady with his U13 Soccer Player of the Year 2014 Award recently at the Lions FC grounds.

Local Resources and Information during the Covid-19 Pandemic of 2020 🗓 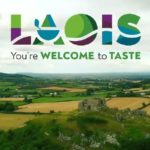 Support Helplines Available in this Region