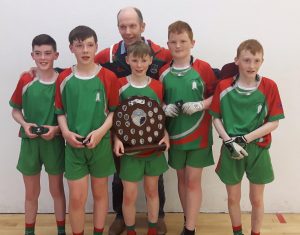 HANDBALL: Cullohill Handball Club enjoyed major success yet again at the Handball All-Ireland Feile Ma nGael held at Carlow and Wexford venues last weekend. Following a pulsating and entertaining final tiebreaker Cullohill Team 1 are All-Ireland Feile Na nGael Division 3 Champions. They lifted the title after a thrilling single point tiebreak win over the highly fancied Moycullen of Galway. After disposing of Clogh of Kilkenny, Mallow of Cork and Broadford of Limerick the Division went down to a straight final shoot out between Cullohill and Moycullen. After the matches where Luke Dunphy partnered Cody Comerford and Dan Kirby partnered Dylan Foyle both ended at 15-14 a share. The two teams had to go to a sudden death playoff to eleven points, Luke and Cody went back in and after leading 10-4 the Galway team pulled it back to 10 all with the final serve deciding the destination of the All-Ireland Title. Thankfully the Cullohill boys held their nerve to close out the match 11-10 and lift the All-Ireland Division 3 Feile title.
Well Done Luke Dunphy, Dylan Foyle, Cody Comerford , Dan Kirby and Martin Drennan on a fantastic achievement. That was not enough for man of the moment Luke Dunphy who went on to collect a second All Ireland Title in the Feile Skills competition Well done also to team mentor Sean Dunphy and also to Ray Fogarty for his help as Skills Coach The Team received a heroes welcome back in Cullohill and all the congratulations are well deserved. photos and updates are on the Cullohill Handball Facebook Page.