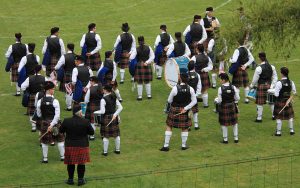 PIPE BAND: The members of the Durrow & District Pipe Band would like to sincerely thank all those who generously contributed to their fundraising collection outside the Church of the Most Holy Trinity, Durrow last weekend. Those present were treated to the melodious tones of the recently reconstituted band which performed a number of familiar pipe favourites in the Church grounds both before and after Masses on Saturday and Sunday. Despite the inclement weather on both days, the band members (some young and some not so young!) braved the elements to entertain the locals, and biting cold notwithstanding, were very warmly received by all. It was a particularly poignant occasion for band leader and instructor John Sheeran who first performed with the band in 1957 and also for committee member Matt Lawless who shares with John a long history of association with the band through fruitful and fallow years. Both men have been instrumental in reviving the band’s fortunes once again and take great pride in the progress made by the new members over the last number of months. Down the many years, and through its various incarnations, the band has been an integral part of the local community and it was clear from the enthusiastic reception from locals last weekend that it continues to hold a special place in the heart of Durrow and it’s environs.