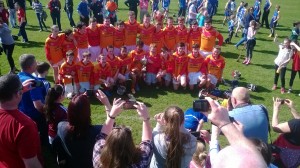 Harps Feile Team All Set for Dungiven: The Harps U14s continue their preparation ahead of this year’s Feile in Ulster/Derry on June 19th, 20th and 21st. Many thanks to all who supported the recent Table Quiz in The Castle Arms Hotel and the Cabaret in O’Connells. Both were a huge success and raised much needed funds for the trip. Our final fundraiser is the Church Gate collection running this weekend and again all support would be greatly appreciated.
The Harps play their first game on Friday afternoon, June 19th, against their hosts – Kevin Lynch’s of Dungiven. Kevin Lynch’s won out this competition last year so the Harps will have to put in a big performance if they are to win their opening game. Later that evening all take part in the Feile Parade with two further group games Saturday morning. The top team from the group goes forward in the competition so hopefully The Harps can progress! The Semi-Finals take place Saturday evening with a number of Finals then on Sunday morning. It would be great if the Harps could make it all the way to the final and better still if they could win it! Regardless of results, it will be a great weekend for all involved and a trip all will remember for many years to come! Best of Luck lads!

Kit for Kids: SuperValu, Ballyragget are currently running a Kit for Kids promotion whereby if you spend €40+ in a single transaction you will get a voucher for your chosen club, The Harps GAA. When 2000 vouchers have been accumulated, SuperValu will award the club a free Kit for Kids!

Senior Hurlers: The Harps Senior Hurlers will welcome Camross to Durrow on June 10th for a 7.45pm throw-in. Please come along on the evening and support the lads who are putting in a huge effort.
Intermediate Hurlers: The Harps Intermediates played Shanahoe on May 30th under a deluge of rain. Despite leading for long spells of the game, the lads came out on the wrong side of a 4-13 to 3-11 scoreline. The intermediate team will travel to Borris-in-Ossory on June 12/13th (TBC) to play Borris-Kilcotton.

Junior Footballers: The Harps Junior footballers suffered two losses to finish the month on a poor note. A very strong Ballyroan-Abbey team won in Durrow before an away loss to The Rock last week saw The Harps drop position on the league table. Last Thursday night’s game against Kilcotton was not played as Kilcotton have exited the league. The footballers travel to Killeshin on June 9th for their next game.

Junior Hurlers: The Junior hurlers played Timahoe at home on June 2nd loosing on a 2-14 to 1-09 scoreline. The team will travel to Rosenallis on June 9th in search of their second win in the Div 4 League.