FORECAST – Periods of rain or showers, becoming mild for a brief spell later…

SATURDAY FEBRUARY 14: Frost and fog slowly clearing. Sunny spells and cloudy periods for much of the day. Light variable breezes and highs of 7c or 8c. OVERNIGHT: Cold and clear with frost and fog. Lows of -2c to +1c. Winds light west to SW. Cloud increasing towards morning.

SUNDAY FEBRUARY 15: Frost and fog quickly clearing as cloud continues to advance from the west. Winds backing southerly and increasing. Rain and drizzle developing by around noon will become more persistant later with some heavy bursts of rain towards evening. Highs of 8c or 9c in moderate to fresh south winds. OVERNIGHT: Rain clearing and winds dropping light as they back to a west to northwest direction. Lows of around 1c or 2c with some patchy frost, and perhaps fog in sheltered areas.

MONDAY FEBRUARY 16: Sunny at first with frost and fog clearing. NW breezes picking up will bring showers of rain, hail and hill sleet. Highs of 5c or 6c, perhaps 7c. OVERNIGHT: Showers dying out, skies clearing. Some fog locally. Cold with lows of -2c to 1c in a light west to northwest airflow. Icy stretches forming.

OUTLOOK: Becoming milder midweek for a time with temperatures reaching 12c on Wednesday. Fresh to strong SW winds during midweek accompanied with spells of rain, but amounts are not expected to be substantial. Thursday night onwards looks like returning into a colder spell of unsettled weather with wintry showers and strong winds. More on this later… 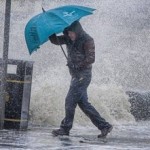 « Durrow Befriending Group require Volunteers
Get your thinking cap On! »