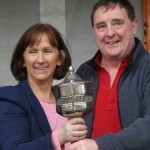 The Community Endeavour Award was presented after the St Patrick’s Parade on behalf of Durrow Development Forum by Evelyn Clancy and was awarded to Gay Lalor who has just retired from Durrow Fire Brigade. Gay joined the fire service in 1967 and was promoted to Station Officer in 1986 taking over from Bobby Hovendon. He is currently the longest serving fireman in Ireland with 47 years service.

Gay was the driving force behind Durrow Fire Brigade’s success in the All-Ireland pump drill competition and was a member of the team that won four titles. In addition to his years as Station Officer, Gay has been a fire service instructor for many years instructing courses all over the country. Gay holds qualifications and in the fire service too numerous to mention and is held in extremely high regard throughout the country. He is also an award-winning Scarecrow fabricator!

Also, Gay was one of the first people in Durrow to obtain a first aid qualification and became an instructor for the Happy Heart foundation, again providing instruction all over the country. In his spare time, he is a Meals on Wheels volunteer and co-ordinator and installer of home alarms for the elderly. Gay also has generously and selflessly allowed his name be used as emergency contact in many homes.