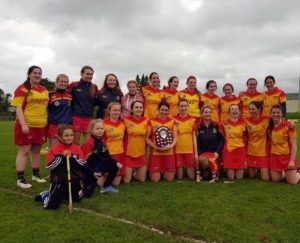 HARPS CAMOGIE: Harps Senior Team take the Shield – Harps 2-08 v 0-11 St. Bridgets: The shield competition was created last year for the first time at Senior level. It could be said that Laois camogie are somewhat behind other counties given that they have only five clubs competing at Senior level. There is no Intermediate or Junior grade. The county final winners then go on to play at Intermediate level in Leinster. Therefore a shield competition is fairly warranted and is becoming sought after as a stepping stone for clubs.

Last years winners, St Bridgets, returned to Abbeyleix on Saturday the 23rd in a bid to defend their title. Harps Camogie, a team very disappointed with last year’s performance, were well fired up for this encounter. Harps started the first half strong and the Harps forwards were moving well, with points coming from Louise Mahony and Theresa Bennett. Bridgets were keeping close all the time slotting over points from frees. However, it was Harps full forward Elaine Mahony who finally beat county goalkeeper Laura Dunne, winning the ball in close, turning and finishing it without delay. With more frees slotting over for Louise Mahony,

Harps went three points ahead in the 25th minute. Midfielder Anne Marie Purcell pushed her side on again scoring three points to make the sides level at half time 0-08 to 1-05. Harps continued their hard work into the second half. Their defence was proving to be extremely difficult to contend with. Centre Back Joanne Prior worked tirelessly and delivered good supply into Harps forwards. Theresa Bennett, Laura Saunders and Louise Mahony continued to keep the scoreboard ticking over.

A high ball into Bridgets goalkeeper proved to be easy pickings for Lorna Campion as she was quick to put the pressure on and score a goal on the rebound. This put Harps up by 5. U16 player Clodagh Tynan was the player to ignite a revival for Bridgets when she took two well taken points. This brought the match to a tight finish with Bridgets gaining control. A close free in the last minute was dealt with well by Harps defence and the game came to a close.

Long serving player Laura Saunders received the Shield on behalf of the team and management. She spoke about the dedication from her team and also the hard work put in by the management Joe Deegan, Aoife Donohue, Martin Fitzpatrick and David Shaughnessy. 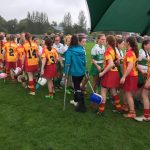 The Harps Camogie back up and running for 2017