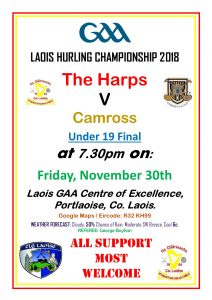 HARPS GAA: Over the past few weekends the U19 hurlers have continued their winning run in the championship to qualify for the final. The results are as follows:

The Harps will face Camross, in a repeat of the first round, this Friday night in Portlaoise at 7.30pm. The venue is the Laois Centre of Excellence on Fr Browne Avenue, Portlaoise. Camross overcame Castletown-Slieve Bloom in their semi-final with six points to spare. Best of luck to the lads!

HARPS U21s: The Harps U21 Hurlers began their Championship campaign with a convincing win over Rosenallis last Saturday afternoon in the north Laois County village. The results from the first round of the Under 21 Championship are as follows:

The Harps U21s will face the winners of Clough-Ballacolla and Rathdowney-Errill in the Semi-Final which is scheduled for Wednesday, December 12th with the time and venue yet to be decided. Again, best of luck is wished for to the lads.

HARPS GAA: Bonus Ball Draw – some vacancies have arisen on the monthly draw – to join please contact Seamus Campion on (087) 2797214. 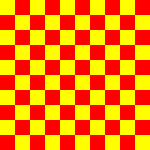