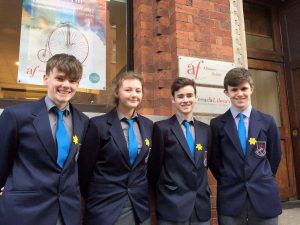 A group of students from Heywood Community Students were crowned All Ireland Joutes Oratories debating champions at the Alliance Francaise in Kildare Street, Dublin recently. The competition started off with twenty eight schools competing. Heywood Community School came out on top after debating five times throughout the year. Team captain Joe Phelan, Durrow; Conor McGavin, Timahoe; Ava Lalor, Abbeyleix and David Vesey, Abbeyleix received the cup from a representative from the French Ambasador. The students were mentored throughout the competition by Ms. Olive Guest who said it was a great honour for the school to take this accolade. Well done to all.