The Harps had a very successful trip to Ulster for the recent Feile where they were hosted by the Kevin Lynch’s Hurling Club in Dungiven, Derry. The team set off   Friday morning (June 19th) and after a long journey arrived in Dungiven before 3pm. On Friday evening they played two games – the opening game against Cuchulainns of Dunloy winning on a 4-05 to 1-02 scoreline. The second game was then against Naas where the Harps also came out on top winning 3-04 to 1-05. The Naas victory was particularly satisfying as last March in a challenge the Kildare team had a comprehensive victory on that occasion. The last group game was then played on Saturday morning with the visiting team drawing the game with their hosts 4-03 to 3-06.

These three results meant The Harps topped their group and progressed to the quarter final. This game was played in Loughiel, Antrim against Padraig Pearses from Galway. The Harps got off to a very bad start and found themselves two goals behind inside the opening three minutes. However, within another five minutes the deficit was cut to a single point and at half time Harps led by one point. In the second half the Harps finished very strong and ran out winners on a 6-04 to 3-04 score line. This qualified them for the semi final on Sunday morning in Owenbeg.

At Owenbeg – the Derry Centre of Excellence – St. Ernans from Westmeath were the opposition. The game was tight throughout and again after a poor start the Harps got into a winning position. However, St. Ernans got the key scores in the second half and went on to win by three points. All were hugely disappointed when the final whistle sounded but all can be hugely proud of their performances. They represented the county with distinction and all in Cullohill and Durrow can proud of what they achieved. It was a great weekend for all involved and although the ultimate prize didn’t return to the parish, all the players have great memories from the weekend and made many new friends in Dungiven. 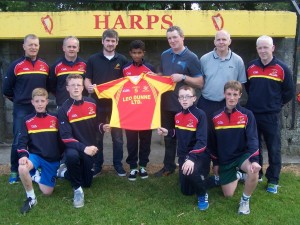 Thanks again to all who supported the various fundraisers ahead of Feile and to Leo Dunne for sponsoring a set of jerseys. The effort put in by the players on the field of play matched the support locally for the team. A Great Weekend – Thanks to All!! 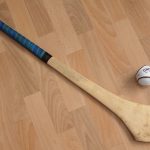