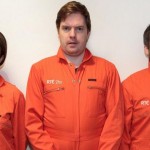 Local man Bernard O Shea (pictured centre) has been announced as one of the presenters of The Breakfast Show on Ireland’s top radio station 2FM.  The new line-up show hits the airwaves in the coming weeks and will also be available internationally via the RTE 2FM website.

The new team replace Hector, who departs the show shortly. The Galway-based presenter is due to return to TV screens in the spring, with a new series of Hector Goes.

Republic of Telly favourites Jennifer and Bernard are being joined by Phantom 105.2 presenter Keith Walsh. Keith and Bernard have worked together before on a radio breakfast show for iRadio 105 -107.

The team have already been busy with production meetings ahead of their 2FM breakfast debut (the date of which is yet to be confirmed).

Well done Bernard from all of the community in Durrow.