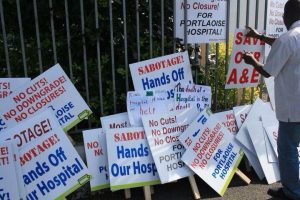 RALLY TO SAVE PORTLAOISE HOSPITAL NEXT SATURDAY: A rally has been organised by the Portlaoise Hospital Action Committee to protest against the planned downgrade of the main hospital in Portlaoise. The committee says it acknowledges the feeling of the wider public to demonstrate their protest at the recent leaked reports and comments, which were made by Dr Susan O’Reilly on behalf of the Dublin-Midland Hospital Group.
The committee says it will be a peaceful rally aptly called ‘Light for Lives’ Rally’ in support of the Midland Regional Hospital Portlaoise. The march takes place on Saturday, December 2nd next from 5pm until 7pm and the committee hope that as many people as possible from the Durrow and Cullohill area attend this important rally. The rally will culminate at Laois County Council Offices. 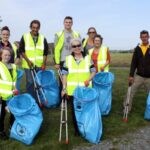