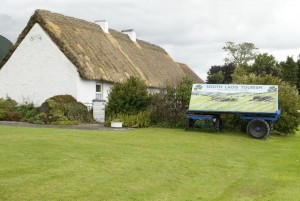 South Laois Tourism held their AGM on Thursday 18th December in Cullohill Community Centre. A well attended meeting included representatives from many organisations in South Laois and North Kilkenny. A successful period was reviewed which included the launch of the South Laois Cycle Trails, a Tourism Information Point, Trails and Heritage Brochures and the new Area Bus Service.

Events such as the Ballagh Cycle Challenge, The MacGiollaPhadraig Way Walk and the RTE John Murray and Nationwide visit to Cullahill were also highlighted. The reopening of Grantstown Lake was seen as a huge plus for tourism in South Laois while the failure of the those in authority to carry out maintenance work on our Rivers was seen in a lesser light.