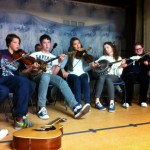 “We are the music makers, and we are the dreamers of dreams.” – Arthur O’Shaughnessy: Culture Night is an annual all-island public event that celebrates culture, creativity and the arts. This year, it took place on Friday 19th September 2014. Spink branch of Comhaltas Ceolteorí Éireann hosted their Culture Night event in Knock Community Hall, Spink on Friday 19th September.  The evening featured a wide selection of musicians, some of whom have recently represented Spink at Leinster and All-Ireland level.  It was very well received by the audience of young and old, as well as young musicians who just joined the branch in September and are starting on their own musical journeys.