HARPS GAA: Laois Team News: Three members of the Harps U17 hurling panel have been chosen on the panel of Laois U17 to play in Tier 1 of the Leinster MHC where they will play Wexford (away), Dublin (home) and Kilkenny (away) over their three games with the first game on May 12th. We wish Lorcan Fitzpatrick, Jim Kirby and Billy McEvoy all from The Harps the very best of luck.

Harps Minors start new season: The Harps Minors (U17s) have been training for the last number of weeks and now get their leagues underway this weekend with two games. On Saturday evening they travel to Rosenallis for a football game and then on Sunday morning they play their first game in the hurling league in Errill where they take on Rathdowney-Errill. This year the team is also entered into the Kilkenny Minor League where they will get excellent games – the first game here is on March 26th against Graigue-Ballycallan. 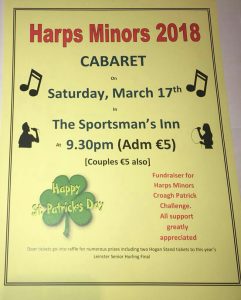 Cabaret for Harps Minors: Next Saturday (St. Patrick’s Night) a cabaret will be held in The Sportsman’s Inn, Cullohill. This is a fundraiser for the Harps Minors who travel to Mayo on April 6th and 7th where they will climb Croagh Patrick – among other things. Admission is €5 with couples also €5 – two for the price of one!!! It should be an entertaining night with DJ Alan Doran – all support most appreciated.