Overview: The recent colder than average weather looks set to continue for the foreseeable future with some early season snowfalls likely, especially on higher ground…

WEDNESDAY NOVEMBER 13th: Following a dry, clear and frosty night with lows around 0c, showery rain or hail will develop in the early morning, but this will clear by mid-morning with cloud increasing from the west. In the early afternoon, rain will arrive from the west with some heavy bursts later in the afternoon. Towards evening, as temperatures fall the rain is expected to turn increasingly to sleet with snow on higher ground. A cold day is expected with fresh west to southwest winds and highs reaching 4c or 5c at best. OVERNIGHT: After darkfall, temperatures will drop quickly and winds will fall light and variable in direction before backing northeast later and freshening. There is some possibility for the band of sleet to turn to snow for a time at lower levels giving locally temporary coverings. Skies will generally clear later in the night and with the wet and slushy surfaces – ice will form as temperatures fall to between -1c and +2c in a north to northeast breeze. The image above is from the European ECM model showing a couple of centimetres of snow settling across much of the midlands and southeast at 12am on Thursday, 13th November.

THURSDAY NOVEMBER 14th: A cold day with a moderate north breeze. Good sunny spells will develop after any showery rain, sleet and snow clears early in the morning. Ice and any lying snow will thaw gradually during the morning. Highs of just 6c or 7c despite the sunshine. OVERNIGHT: Cold and clear with a light to moderate north-northwest breeze persisting. Lows of around -1c or -2c with frost and some local icy stretches.

FRIDAY NOVEMBER 15th: Another cold day with a moderate northerly breeze. Mostly dry and sunny, though an isolated shower or two is possible during the afternoon. Highs of 7c or 8c at best. OVERNIGHT: Winds will drop light and skies will clear. Becoming very cold with a sharp frost as temperatures drop to -3c, perhaps lower locally.

WEEKEND OUTLOOK: Becoming cloudy on Saturday morning with rain, sleet and hill snow extending from the west by around noon in light northwesterly breezes. Cold with highs between 3c and 6c. Rain, sleet and snow for a time Saturday night before clearing to cold and frosty conditions with ice forming later. Lows of -1c to +1c. Sunday and the early days of next week look set to be mostly dry, but cold with ongoing frosts at night. 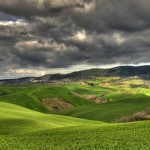