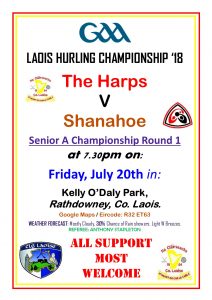 GAA: The Harps Senior Hurlers open their championship campaign with a tough task in Rathdowney where they face their north-eastern neighbours Shanahoe Gaels at 7.30pm on Friday, July 20th. The Harps have bounced back from last year’s disappointing campaign with a Division 1 League season recording three wins and a draw to maintain top flight hurling again next Spring. But, next Spring will be far from the forefront of The Harps’ minds when they cross the white line of Rathdowney’s redeveloped pitch this Friday.

Opponents Shanahoe Gaels have had a fair run in their league season winning four games in Division 2. They boast a full strength panel ahead of Friday’s clash and with two newcomers to the panel in Shane Bowe and Davis Madden along side county star Leigh Bergin they will pose a danger to The Harps as they also seek to overturn a disappointing 2017 championship campaign.

With a mostly dry evening forecast and even a chance of some sunshine in just light breezes, conditions should be perfect for a keenly contested game of hurling. The Harps GAA appeal to all supporters to come along and roar the team on! If you are unable to attend, please follow the Club’s Twitter page for score-by-score updates: http://www.twitter.com/TheHarpsGAA online.