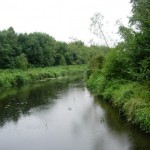 The alluvial woodland site at Knockanoran, Durrrow, Co. Laois is accessed via a small road, the L16401 that joins the R434 about 1km northwest of Durrow. Approx 1km along the L16401 there is a sharp turn to the right, but ignoring this turn and going straight ahead down a lane will lead you to the site.

Durrow is the second largest site in the project. It consists of wet woodland on the floodplain of the Erkina River, tributary to the River Nore. The site flanks the north and south river banks and the entire area is liable to annual flooding. This project site is considered one of the largest areas of alluvial woodland in Ireland. Records show that the alluvial woodland here at Durrow is very old.

Planting of non-native conifers on the site in the past resulted in a patchy establishment due to the high water table. There are significantly large areas where these exotic conifers have fared poorly and the native alluvial woodland is re-establishing. There has also been some planting, and natural colonisation, of exotic broadleaved trees including grey alder (Alnus incana), Italian alder (A. cordata), sycamore (Acer psuedoplatanus), horse-chestnut (Aesculus hippocastanum) and lime (Tilia spp.) although these now appear to exist primarily as scattered individuals.

The restoration techniques will concentrate mainly on the removal of the non-native trees and further enhancement of biodiversity of the alluvial woodland through the increase of deadwood. This will encourage the flora and fauna of the alluvial woodland habitat. A healthy natural regeneration of native plant and tree species is widespread on the site.

The native vegetation of the site is dominated by ash (Fraxinus excelsior), alder (Alnus glutinosa), and willows (Salix spp.), along with birch (Betula pubescens and Betula pendula), wych elm (Ulmus glabra) and hazel (Corylus avellana). There is also a rich shrub community, including the rare purging buckthorn (Rhamnus catharticus), and a diverse field layer dominated by moisture loving species. The area to the south of the river is enriched by calcareous springs and the vegetation has a fen character whilst to the north of the river it is more acidic and consequently less species rich.

There is a complex network of drainage channels running through the site, some of which appear to be overgrown, and there also exist small natural streams running off the higher ground surrounding the site. In order to reinstate natural water regimes restoration techniques will be carried out which will involve the strategic installation of dams. The work by Coillte will assist the recovery of the alluvial woodland through the slowing down of water release during flooding. The restoration of the woodland will also enhance the habitat of the river.

Below is a link to the the Walking Durrow website, which provides details, photographs and route maps of some of the beautiful walks on Durrow’s Leafy Loop trail.