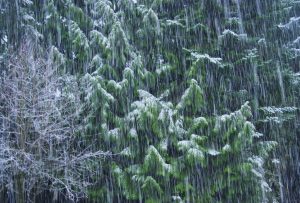 SUNDAY: A bright start, however cloud will increase throughout the day with a freshening easterly or north easterly breeze. Cool with highs of 6c or 7c at best. In the evening time patchy drizzle or sleet will develop. OVERNIGHT: Patchy drizzle or sleet becoming more persistent and falling as snow in places after midnight with accumulations possible especially over high land. Cold with lows of 0c to 2c in a moderate east to northeast wind.

MONDAY: Overcast with sleet and snow for a time, however this will quickly turn to rain before clearing to showers as milder air extends from the south and winds back to the south east. Milder with highs reaching 8c to 10c later in the day. OVERNIGHT: Overcast generally and a few isolated showers. Lows of 4c to 6c in light southerly breezes.

TUESDAY: Generally overcast with showery outbreaks of rain, some thunderstorm activity is possible also. The showers will merge into a longer spell of rain later. Milder in light south to southwest breezes. Highs 10c to 12c. OVERNIGHT: A spell of rain for a time with locally heavy bursts though this tending to clear later. Winds fresh southwesterly backing westerly later. Lows of 4c or 5c again.

WEDNESDAY: After a dry start, showers – some with hail, sleet and thunder will develop in the afternoon and winds will freshen from a west to northwest direction making it feel notably cooler again. Highs just 7c to 9c, perhaps 10c. OVERNIGHT: Cold and clear with frost and some icy patches. Lows of -1c to 2c in light variable breezes or locally calm conditions.

OUTLOOK: Some mixed signals surround the end of the week, Thursday looks set to become wet however there is a chance of Thursday’s front becoming stalled for Friday and the start of the weekend. This is because Atlantic air from the west is trying to push east and is hitting a push of continental air in the east pushing west! Depending on where the front stalls between these two airmasses will determine the kind of weather we will have: If the frost stalls to our west, then a mild weekend with some sunshine is in store – temperatures reaching into the mid-teens, however if the front stalls to our west then a showery and more cloudier spell is in store with highs around 10c. The worst possibility is for the front to stall overhead giving continuous rain – which would lead to spot flooding. All three scenarios carry a 33% probability, so keep in touch with forecasts this week for ongoing updates.