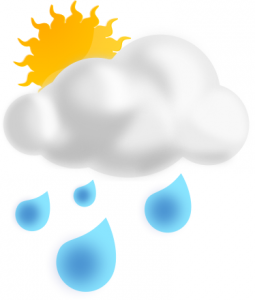 Thursday Night: Showery overnight with localised and possibly thundery downpours. Cooler than recent nights with lows of 8c or 9c in a light westerly breeze.

Friday: Further showers from early morning, tending to ease in the late morning. Some sunny spells and isolated showers in the afternoon. Highs of 15c or 16c in a moderate west to northwest breeze.

Friday Night: Another band of heavy showers is forecast to arrive from the west after dark and push across the region overnight, again some localised thundery downpours are possible in the brisk west to southwest breeze.

Saturday: Any early showers quickly clearing and breezes dying down as they back south to southeast. A fair morning before cloud quickly builds from the southwest. In the afternoon, rain will push in from the south turning persistent in the late afternoon and early evening. Winds will back south east to east with the rain, but should remain light to moderate. Mild with highs of 16c or 17c.

Saturday Night: Rain, turning persistent and heavy for a time will clear later in the night. Totals of between 12mm and 18mm expected. Winds will back northeast to north then northwest as the rain clears eastwards later. Mild for late September with lows holding around 10c.

Sunday: A fair day is expected once any rain clears the east. There is a small chance of an afternoon shower. Mild with highs of 16c or 17c in light northwest to west breezes.

Sunday Night: Cool overnight with clear skies and lows dropping to around 5c in near calm conditions.

OUTLOOK: Rain will arrive from the west during Monday and thereafter it looks set to remain unsettled with alternating showers and frontal rain episodes. There is a possibility of strong winds next Thursday – more on this later.