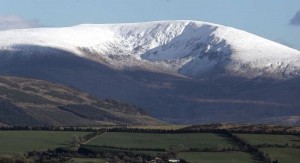 In this region of South Laois the winter of 2018-2019 will be remembered for its overall dry conditions and the three mild spells which helped make the season ‘feel’ shorter than it usually is. In meteorological terms, Winter comprises of the months of December, January and February, so for the purposes of this report we will be reviewing these three months.

December: The month of December was the only month of the season to report above average rainfall with a total of 138mm falling. In an average December the totals usually come in around 90mm, so last December was around 50% more than normal. Frosts were rare throughout the month as there was a persistent southwest breeze blowing. Two air frosts were recorded at the start of the month, with a cold -2.7c air minimum recorded on the fourth which also saw a grass minimum of -6.5c. Indeed there was just 5 grass frost instances in the month. The first three weeks were dominated with low pressure centres coming close to Ireland and thus there were some notable rainfalls: 15mm on the 4th with another 11mm and 10mm on the 14th and 15th respectively followed by a fall of 18.3mm on the 17th; another 10.4mm on the 20th and finally 13.3mm on the 22nd making up the bulk of the month’s rainfalls. High pressure built up from the south just in time for Christmas giving a very pleasant and mild holiday season with temperatures ranging from 10c to 13c every day out to the New Year. The average temperature for December came in at 7.8c which is 2.5c above normal for the month.

January: Continuing on from December, high pressure kept a dominant command on the weather, however the position of the high meant that the mild temperatures over the Christmas period were not sustained beyond the start of January. Temperatures in the first week hovered around 7c or 8c by day and between 2c and 4c by night. In the second week temperatures recovered and ranged 8c to 11c by day and between 4c and 6c by night. Only one grass frost was registered in the first half of the month. Around mid month, the weather became much cooler, but still held dry by and large. Temperatures by day fell back to range 5c to 8c generally and overnight lows fell to slightly below freezing at times. The coldest night of the period saw a -3.6c air minimum with a grass minimum of -6.5c on the 21st. The final week of the month saw high pressure move to the east and some atlantic fronts cross over. The wettest day of the month came on the 26th when 11.7mm fell. High pressure to the east allowed some cold air to take hold on the 30th and gave a sharp -5.0c air frost (-8.7c grass) on the morning of the 31st. With an advancing front from the atlantic hitting the cold air, many upland areas saw a fall of snow. However, temperatures remained slightly too high for any significant snowfall at lower levels. The average temperature for January came in at 5.8c which is 0.8c above normal for the month. Rainfall totals were 35mm which was just over a third of the 92mm a regular January sees.

February: The jet stream in the Atlantic gathered strength in the first week of February bringing several spells of rain and a gradual increase in temperatures, however a few chilly nights with frost occurred with the month’s low of -3.6c (-6.9c grass) occurring on the 1st . From the second week onwards, high pressure built from the southwest and a further increase in temperatures occurred with daytime highs reaching between 8c and 13c. Overnight lows increased also with lows generally 1c to 7c. High pressure relaxed for a few days after mid-month allowing a few weak atlantic fronts through, but no significant rainfalls were noted. The last week of the month saw high pressure build across France and northern Spain encouraging a mild southerly airflow over Ireland. Quite mild conditions developed with daffodils emerging some 10 days ahead of normal. The highest temperature of this spell was 14.3c on the 26th, though fohn effects in other parts of Ireland saw 17c recorded in the west. The average temperature for February came in at 7.3c which is 2.1c above normal. Like January, this month was also very dry with a total of 33mm recorded slightly under 50% of normal (67mm).

Winter 2018-19: Overall a mild winter with an average temperature of 7.0c which is 1.8c above the seasonal normal. Rainfall was below normal with 206mm recorded – the average winter delivers 248mm, so around 82% of normal. The highest temperature was 14.3c on February 26th and the lowest temperature was on January 31st with -5.0c recorded. Over the ninety days of winter, air frosts were recorded on fourteen nights (D2;J6;F4) and grass frosts were recorded on twenty-six nights (D5;J10;F11). Unfortunately, our anemometer was damaged at the end of January meaning that we have no wind data from the end of January. It is envisaged that we will have this up and running again in April. For live up to the minute weather data visit www.laoisweather.com online.