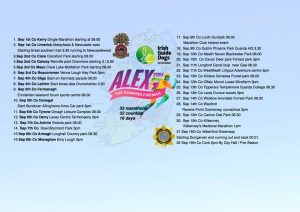 The Biggest Challenge to date Cork fire fighter Alex O Shea will attempt to run 32 marathons in 32 counties in just 16 days. Alex will be joined by Garda Ollie O Sullivan. Ollie will be a vital part of the crew for this challenge and will also attempt his own personal challenge of 50km a day.

In 2014 the challenge was at the age of 40 to run his first ever marathon. After a years training he did so and he broke the existing Guinness world record for the fastest marathon in full fire gear running in a time of 3hrs 41min 10sec at the Cork City Marathon.

In 2015 and the challenge he set for himself was to run from Malin head to Mizen head. The dream however was to push himself to challenge the world record and complete the distance in under 3days 15hrs 36min & 23sec. Injury day 1 at 100mls forced him to withdraw regroup and learn from the experience.

2016 was all about recovery and focusing on a new challenge the 24hr ultra endurance race. He finished fifth on his first go and achieved the Irish B qualifying standard at the Energia National 24hr Championships. From there he also went on to represent Ireland at the 100km World Championships in 2016.

In 2017 he achieved the international qualifying A standard for the 24hr event covering 151.75miles in 24hrs finishing second at the National championships.

Alex is raising funds for the Irish Guide Dogs for the Blind as part of his 32 county challenge and he will run in Dunmore Woods, Durrow, Co. Laois on Wednesday, September 13th at 3pm. All support would be greatly appreciated.

You can track his progress on his Facebook Page. 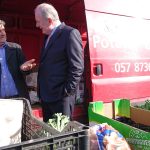