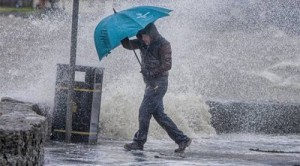 Overview: Monday and Thursday the better days, Tuesday, Wednesday and Friday set to be wet and windy. Generally cool to cold though mild for a time on Wednesday.
MONDAY: Sunny spells and some cloudier periods with a shower or two in a fresh NW breeze. Cool with highs 6c to 8c. Overnight: Cold and clear with lows from 0c to 3c in a light W breeze. Clouding over in the early night with a spell of heavy rain later. Temperatures rising a little as the rain arrives. Winds backing SW and increasing with the rain.
TUESDAY: Any rain quickly clearing and it will be fair for a time with the slight chance of a shower. Winds light at first, SW will back S later as cloud with rain later builds from the west. Highs of 7c. Overnight: Wet and windy with a fresh to strong westerly wind. Mild with lows around 7c or 8c.
WEDNESDAY – Storm Dudley (Yellow Level Warning): With Tuesday night’s rain cleared it will be a fine morning and mild too. However a spell of rain will spread from the west by noon with increasing SW winds, backing west and increasing further as the rain clears by early evening to blustery showers. Turning much colder at that stage too with temperatures dropping sharply from around 13c in the morning to around 3c by evening. Some of the showers may turn wintry. The winds (W to NW) will continue to be very strong overnight with some damaging gusts. Wintry showers continuing. Lows around 1c or 2c.
THURSDAY: By morning the winds will have eased and the showers will have died out. A fair day is expected though a light shower around lunch time cannot be ruled out. Highs of 6c in light west winds, backing southerly later as cloud builds from the southwest. Overnight: Rain and sleet quickly spreading from the southwest. Winds increasing strong, with some gusts likely. Becoming milder for a time later in the night, temperatures rising to around 8c.
FRIDAY Storm Eunice (warning to be issued later): A very windy day with squally showers and these turning increasingly wintry as the morning goes on. Temperatures falling sharply.
More later in the week.