Anglers have had a busy and competitive August

Durrow-Cullohill Parish Anglers held a pike fishing competition for the O’Duain Cup recently. The fishing was very good and the winner was Ian Drennan, with David Walsh in second place and in third place was Tommy Coffey. The following weekend the fourth round of the Richard O’Rourke trophy was fished on Grantstown Lake and Jonathan Stapleton won the prize with Mick Walsh in second place and Patrick O’Regan in third place.
Then on the following weekend the club held the fifth and final round of the Richard O’Rourke trophy which was also fished on Grantstown Lake. The winner of the fifth round was Alan Dwyer with Patrick O’Regan in second place and David Walsh in third place.
After the competition the overall winner was announced and it was Patrick O’Regan. A pike fishing competition for the Con Geoghegan Memorial Cup was held on Sunday August 21st and the winner was Ian Drennan, second Sean Geoghegan and third Pat Dunphy. The next angling competition will be the last trout fishing competition of the year and it will be fished on Sunday September 11th for the Paddy Holohan Memorial Cup. 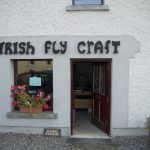