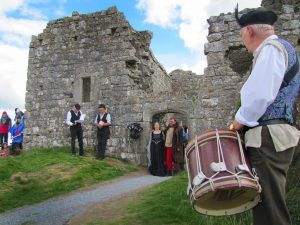 A group from the Bulfin Heritage Cycle Rally, will visit Tarbert, in Co. Kerry on May 4th, for the Cuckoo Walking Festival. We leave Durrow on Saturday May 4th at 9.30am and return on Monday May 6th. A bus will be available on Saturday morning for bike transport. As we will be travelling “under our own steam” the journey to and from Tarbert is at your own discretion .. that means; if you wish to be a part of the High Nelly cycle and the Laois Sept pageant, as organised, you may wish to opt for the Sunday visit only. Either way you will be very welcome to join us.

Accommodation is provided at the local Hostel at a cost of €20 per person per night, to include continental breakfast. B&B upgrade available locally. if you are thinking about joining us, please be aware that Bookings need to be confirmed very shortly. Should you need further information, please feel free to contact Hugh on 086 8694691 at any time.

What we’ll be doing!
On Sunday 5th, as the clock strikes midday, in the Kingdom, the Bulfin cyclists on High Nelly bikes, will depart from The Bridewell, and cycle through local roads in Tarbert and Glin, including a stop for ice cream at Wallace’s country shop, a visit to Glin Castle and an energy drink at a local hostelry in Glin. At 7pm on Sunday evening, May 5th, the Bulfin Cyclists will perform their pageant ‘Return of the Seven Septs of Laois, which was first enacted at last year’s Bulfin Heritage Cycle Rally, on the Rock of Dunamase, and was written by Michael Creagh.

The Laois – Kerry Connection
The pageant delves deep into the history of County Laois, to the early 1600’s in fact, and has forged the strong connection between the Laois based Bulfin Heritage Cycle, and Tarbert Historical Society. Seven families, who had fiercely resisted English rule, were banished to Co. Kerry, under sentence of death, should they ever return to Laois. It was Michael Christopher Keane, who recently researched and highlighted the story of the Seven Septs, in his excellent book, From Laois to Kerry., which was first published in 2016. In the book, Keane describes how the families were were handed over to Patrick Crosbie, and were transplanted to lands he had been granted in the Tarbert area of Kerry. The names of the seven clans were O’Moores, Kellys, Dowlings, Lawlors, Dorans, O’Devoys or Deevys or Dees and McEvoys. The fact that descendants of the seven septs, still reside in the Tarbert area to this very day, was the inspiration behind last year’s Bulfin Cycle, and the battle-cry was, “It’s time to bring them home!”

With the help of the Tarbert Historical Society, who arrived at Dunamase, on August 25th 2018, carrying seven torches, each representing one of the seven families, we succeeded in having a representative of all the exiled clans, present for their long awaited return to County Laois. Prior to the arrival of the Bulfin cyclists, you really got a sense that something special was happening on the Rock of Dunamase that day. From every vantage point on the Rock, people stood, scanning the roads, and the surrounding countryside, to catch a glimpse of their approach.

And for our cyclists coming from Emo Court, it was amazing to arrive at Dunamase, and see the crowds that had gathered, wanting to be part of, and witness this historical moment. The anticipation was very real, and though the return of the Seven Septs of Laois, was billed as a ceremonial one, it was beginning to feel entirely more real, than it did symbolic! So we are really looking forward to re-enacting the Return of the Seven Septs Pageant, in Tarbert, for this year’s Cuckoo Walking Festival, and everyone is welcome to join us! We hope to make it as special a performance, as it was at Dunamase last year.

We would also like to acknowledge and extend our sincerest thanks, to our friends at the Tarbert Historical Society, for their co-operation and involvement in our event last year. 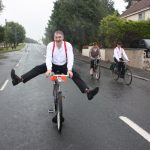 Bike Week 2019 in Durrow is packed full of Activity 🗓 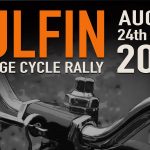