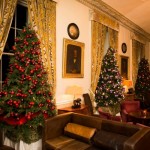 Our Lady’s Meadow Primary School was presented with a cheque for €793 on Thursday last by Shelly Stokes of Castle Durrow and Oliver and Martin Lawlor of Lawlor’s Florists and Garden Centre. The funds were the proceeds of a raffle held  during a Flower demonstration by Oliver and Martin during the Christmas Gala night held in Castle Durrow during early December. The cheque was presented to Canon O’Doherty and School Principal Helen Coe. A big thank you to everyone who supported the draw and to Castle Durrow and Lawlor’s.