CHURCH GATE COLLECTION: The Annual Church Gate Collection in aid of Epilepsy Ireland took place on the weekend of December 12th and 13th. Members of The Harps GAA collected a total of €563.28 in Durrow and Cullohill. Many thanks to everyone for their generosity. 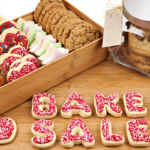