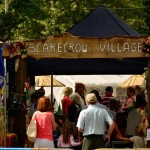 The festival drew to a close on Bank Holiday Monday after nine fantastic days of entertainment, fun, happiness and laughter. It has been the most successful festival to date, with over 16,000 people entering the Scarecrow Village and an estimated 2,500 or more who simply roamed the streets of the town. The success of this community run festival is a source of great pride for the Durrow Development Forum, but we couldn’t have done it without the support of our sponsors and the local army of nearly 100 volunteers who work tirelessly to ensure that the festival is the best it can be.

Four years ago, the festival was non profit making and relied heavily on the financial support of Laois Partnership. However after 2012, we were no longer eligible for this funding. Instead of giving up as so many festival committee’s do, we worked even harder… we cut every cost we could, we twisted every arm, we begged, we pleaded, we did what we had to to make it work and together as the community of Durrow, we have made the festival both self financing and better still, profit making. We were nominated for Best Festival in the Irish Times Ticket Awards for 2012 & 2013, so we must be doing ok.

For a voluntary committee working in a small community, this is no small feat… but then Durrow is a very special place. It will be a few weeks before we have a figure of the funds raised by the festival, but as always all of the monies will be reinvested back into the community.

Durrow Development Forum would like to thank the following people who played such an important part in the festival:
– our amazing volunteers…. whether you gave an hour or a week, you were on our team!
– the scarecrow creators, without you we wouldn’t have a scarecrow festival
– the 18,000+ people who came and supported the festival. It has been our pleasure to have you visit.
– our sponsors and supporters
– the craftspeople who gave their time, skills and expertise free of charge
– those who loaned us equipment or helped in any way before, during or after the festival.
– the Scarecrow Championship judges… a very hard and time consuming job…

And last but not least, the community of Durrow who are so supportive of our efforts and happily welcome the visitors to their hometown over the course of the festival. We are already taking about the 2015 festival, and look forward to seeing you all again next year!