Durrow is Ireland’s Hotspot of 2014 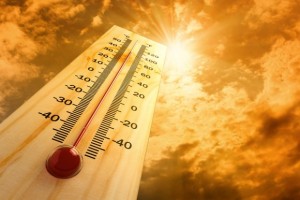 The Climate Station in Durrow recorded Ireland’s highest air temperature of the year in 2014 according to a Met Eireann Annual Report published last week. After several weeks of fine summer weather with little amounts of rain the heat peaked on July 25th when the mercury soared to a hot 28.8c (84F). Overall the year was milder than average and slightly wetter than average along with more sunshine than in typical years. A total of 1052mm fell which is some 130mm more than normal for this area. The coldest air temperature recorded was –6.1c on December 29th recently while a grass frost returned –8.8c on the same night.
Snowfall was rare last year, however February 11th saw a mini-blizzard drop over 3cm of snow. This was quickly followed by a storm on the 12th of February when high winds with a top gust of 76mph brought much disruption. Bank Holiday Saturday August 2nd saw over 40mm of rain fall which was unfortunate for the Scarecrow Festival, but further north in Clonaslee they saw 95mm fall which was Ireland’s wettest day in 2014. A week later violent thunderstorms struck the area for several hours along with intense falls of rain and hail. Thereafter the year was relatively benign. Who knows what 2015 will bring?