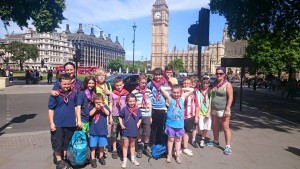 On July 2nd a contingent of ten Cub Scouts, three Beavers and one Scout travelled to Gilwell in the UK for their annual summer camp. It was very exciting for all the scouts involved as some had never been on an airplane before!

They participated in many onsite activities including Canoeing, Archery, Raft building, Aerial Trek, Jacobs Ladder, Go-Karting and they also had a chance to mix with cubs from other countries .They also had a visit to London and travelled on a double-decker bus, the underground tube and overground train.

In London they visited Buckingham palace, Westminster Abbey, Big Ben and the London eye and had ice cream in Green park with the wildlife! The leaders that travelled with the group were Eva Dunne  (section leader), Leanne Fogarty, Delphine Lawlor (AGL) and Debbie Stapleton. It was a most memorable camp and thoroughly enjoyed by both the scouts and leaders! 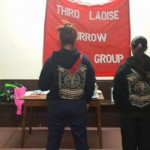