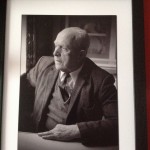 Giant TV broadcaster France 24 who command a massive 45 million weekly viewership are currently en route to Bobs Bar at the old bridge in Durrow. Tomorrow, they are to visit the Jack Moyney VC Snug in the museum pub where they will film a report which is to be aired as part of their Remembrance Day documentary. The World War I Remembrance Day documentary will be broadcast on November 11th worldwide and will include an interview with publican Bobby Campion, who’s grand-uncle was Jack Moyney.

Jack Moyney, is a relative of The Campions formally from Rathdowney, Co. Laois, who served in the Irish  Guards during WW1. The Victoria Cross was awarded to him for being in command of 15 men forming two advanced posts. Surrounded by the enemy he held his post  for 96 hours, having no water and very little food. On the fifth day, on the enemy advancing to dislodge him, he attacked them with bombs, while also using  his Lewis gun with great effect. Finding himself surrounded, he led his men in a charge through the enemy and reached a stream, where he and a private Thomas  Woodcock covered his party while they crossed unscathed, before crossing themselves under a shower of bullets.