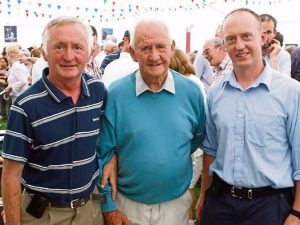 Harold Lawlor from Durrow was the Toast of Tullamore Show when his collection of Vegetables was judge to be the best entry in the Bridge House All-Ireland Collection of Vegetables. Ninety Four years young Harold won with his Celery, Carrot, Parsnip, Potato’s and Cauliflower. His victory was all the more sweet as his Grandson Colin was second only one and a half points behind him. Both Harold and Colin got many prizes in the vegetable section. Well done to both on achieving such high standards!
Midlands Champion: While his Father and son were winning all around themselves, Harold’s son Martin was winning most of the Dahlia Classes at the Show. Martin won the Midland Dahlia Championship with his two vases of Hillcrest Candy and Mary’s Jomanda; he also got the best Vase at the show and five more first prizes. All and all it was a very good day for the Three generations of the Lawlor Family. Well done to all three for doing so well and keeping Durrow to the fore at these events.

Photo from, and further reading at: http://www.leinsterexpress.ie/news/home/266428/all-ireland-title-for-94-year-old-durrow-vegetable-grower.html