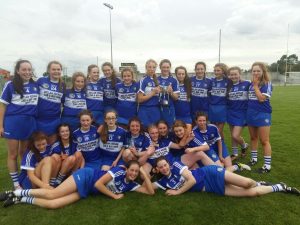 Best wishes were expressed to the U16 Laois camogie team (photographed opposite) in their All Ireland B Final replay who played Antrim on Saturday the 2nd September in Inniskeen, Co. Monaghan. Following the last match which finished with a scoreline of 2-13 apiece, the girls won 3-06 to 1-10, claiming the All-Ireland! We are very proud to have five girls representing our club on this panel: Molly O Connor, Jade Bergin, Eimear Fitzpatrick, Roisin Phelan and Sophie McCabe.

Senior Championship – The Harps 1-10 v 1-08 St. Brigids: The Harps held out for a well deserved win against old rivals St. Brigids on Sunday the 27th August. This was a well needed victory for the girls which leaves them third on the league table. They will now play Camross in the semi final on the 9th of September. Look out on our Facebook page for a time and venue.

Barneys Bonus Bonanza: Thank you to everyone for their continued support. Look out on Facebook for our September winner.