Hughie Sheppard is the winner of the Community Endeavour Award 2017 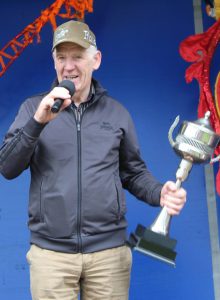 Durrow Development Forum were delighted to present Hughie Sheppard with the Community Endeavour Award 2017. Hughie returned from England in the early 1970’s and became one of the founder members of the Lions Soccer Club. He also founded the first schoolboy’s team. Hughie was also chairperson of the Harps GAA Club from 1989 to 1992. He was one of the founder members of Durrow Development Forum and was instrumental in the development of the Mill Wheel and Cannon Carrigan amenity areas, The Leafy Loop Walk, The Courthouse Library, The Community Playground and the Scarecrow Festival. Since retiring from the Durrow Development Forum in 2011 he has been involved in cycling trails and other local projects. Well done Hughie.