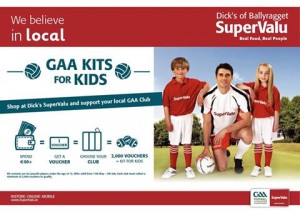 Kit for Kids: SuperValu, Ballyragget are currently running a Kit for Kids promotion whereby if you spend €40+ in a single transaction you will get a voucher for your chosen club, The Harps GAA. When 2000 vouchers have been accumulated, SuperValu will award the club a free Kit for Kids!

Senior Hurlers: The Harps Senior Hurlers travelled to Borris-in-Ossory on Sunday evening last to face Borris-Kilcotton in their third round Division 1 League tie. Still searching for their first win in this year’s league, The Harps were quietly optimistic of a win following their Palmer Cup victory over the same opposition a few weeks ago. The weather conditions on the night were dreadful with spells of heavy rain passing over the foothills of the Slieve Bloom Mountains.
Overall it was an entertaining game with some good spells of hurling at times considering the wet conditions underfoot. Full Time: The Harps 0-15 v 0-17 Borris-Kilcotton. The Harps Senior Hurlers are still searching for their first win in the ACHL1 and will welcome Camross to Durrow on June 10th for a 7.45pm throw-in. Elsewhere in the division, Clough-Ballacolla are top of the table following their narrow five point win over bottom-of-the group Colt.

Intermediate Hurlers: The Harps Intermediates put in a spirited performance last Friday, May 15th against Castletown in Durrow, but second half wides were to prove costly as Castletown held on for a deserved 0-12 to 0-06 win. With a lot of players exam tied it is tough going for this Harps Intermediate team at the moment but there is plenty of scope for improvement as the year goes on. The Intermediates face Shanahoe at home on Saturday, May 30th in Durrow at 7.30pm.

Junior Footballers: The Harps Junior footballers suffered their second defeat of the league campaign when losing out to Arles Kilcruise last Wednesday, May 13th. The Harps looked the stronger outfit in a promising opening half, with two excellent individual goals from Mark White and David Doheny sending The Harps into a 2-09 to 0-10 half time lead. The second half however saw a complete turnaround in this game as The Harps were held to a mere 0-02, while Arles Kilcruise shot 1-09 to turn the game on it’s head and give them a 5 point victory. The Harps fade out was probably down to Arles Kilcruise’ superior fitness levels and this is something The Harps will hope to improve upon in the coming weeks. Best on the day for The Harps were Steven Thomas, Pat Walsh, Mark White and James Campion. The Harps are at home in the next round to Ballyroan on Saturday 23rd of May at 7.30pm in Durrow.

Junior Hurlers: The Junior hurlers recorded their first win of the Division 4 League when they travelled to Ballacolla to face rivals Clough-Ballacolla last Wednesday evening. Justin Brophy was in top form bagging a goal to send the Harps on their way to a 1-17 to 0-08 final score with Conor Deegan floating over points from incredible angles. They next play Portlaoise at home on May 26th at 7.45pm.

Volunteers Wanted! The Harps GAA are on the look out for a volunteer to help out with our live match updates. If you are handy with a smartphone and have a generous data allowance from your mobile phone provider, then we want your help! The Harps GAA has a massive online following with over 400 Twitter and 500 Facebook followers. As a club we want to bring our games to our audience who may be exiled abroad, unable to attend games owing to health, age, ability, work commitments, education etc… Getting the games to our fans is vital for the club to keep interest at the forefront. We are in particular looking for coverage of our juvenile games, so if you would like to help out please contact the club secretary, Daniel Dunne on (087) 4103520. All training will be provided.

County Board Draw: The next draw is Friday June 5th, best of luck to everyone who bought a ticket! 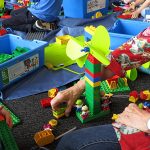