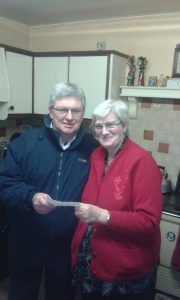 Third Time Lucky Lotto: Congratulations to Mary Townsend who was the second winner of the Third Time Lucky Lotto following on November 19th last. Mary’s number 40 was the bonus ball in the National Lotto Draw on the night landing her €500. Mary’s win follows Tommy Moore’s win in October when his number 17 netted him the inaugural prize. Well done to both and best of luck to all our supporters in the December draw which takes place one week before Christmas Eve on December 17th!

Wrenboys Hurling Tournament: Plans are underway for an adult hurling tournament to be held on St. Stephen’s Day with four teams picked from within the club’s membership. It all throws-in at 11am with Tucker’s 65ers playing Murphy’s Gaels in the first semi-final followed by Brophy’s Blockers playing Richie’s Army in the second semi-final at 11.45am.
The two losing sides will meet at 12.30pm for the shield final followed by the Cup Final at 1.15pm. All games will be played at The Harps GAA pitch in Durrow. Do come along and enjoy the craic and bring the family. Admission is free. Detailed posters will shortly be displayed in shops and pubs across the parish detailing the team selections – but beware, there could be a couple of special appearances/cameos on the day!!!