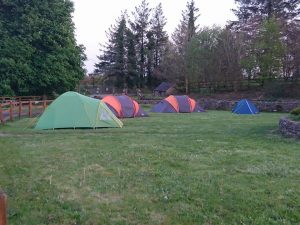 Last week a team of six Scouts entered the County Shield challenge in Charlevile Castle, Tullamore. The competition tested their scouting skills in lone camping, campcraft, cooking & hygiene, skills bases and teamwork. They also had a trade fair and a campfire sketch. It was a very enjoyable camp and the Scouts worked very well together and won the Test Meal Shield – a huge achievement as it has only been won by one other team in the County over many years. The team consisted of: Edward O Brien PL, Evan Campion APL, Mikey Fogarty Camp Chef, Eric Lawlor First Aid, Fionn Tobin Quartermaster, Dylan Parkinson Record Keeper. Well done to everyone, you are making everybody proud!
The Beavers have just had their camp for their Chief Scout Award in Shrahan, where they shared activities with the Roscrea Beavers at the weekend. Camping season is here for the scouts in Durrow!
The Venture scout section would like to wish the Scout Section the best of luck in the up coming Slivebloom County Shield Competition. Sadly the Venture Sword Competition was call off due to poor uptake within the county. A deposit is now due for Jambori 2018 in Stradbally Hall and this promises to be a great week of fun, learning, and meeting lots of groups from around the world, and is great to have such an event upon our doorstep. It promises to be great and a camp that should not be missed!