The Harps senior hurling team remain in the senior hurling championship for another year after they produced their best performance of the season to see off Castletown in the relegation decider. With both teams understandably a bit nervous at the start, the first ten minutes was littered with mistakes by both sides as they traded scores. The Harps had that bit more experience in their ranks however, and 15 minutes into the half John Brophy and Brian Dunne combined to set up Eoin Clancy for a goal which transformed The Harps. The shackles seemed to come off and scores flew over from all angles as John Brophy, Barry Dunne, Richie Saunders and Brian Dunne all added points. The half time whistle couldn’t come soon enough for Castletown, as they just about hung on when trailing by 8 points.

Harps players and supporters alike were expecting a big backlash from a proud Castletown team, but The Harps team were matching their opposition for work rate and determination. The game reached a pivotal moment inside the opening ten minutes of the second half when Castletown were awarded a penalty. Paddy Mullaney was brought up to take it but his rasping shot flew just over the bar, to the relief of The Harps contingent. The Harps extended their lead with good points from Richie Saunders and Gavin Dunne, and when Mick Lanigan fielded brilliantly inside the square, he had only one thing on his mind as he blasted to the net to end the game as a contest. Credit is due to Castletown who never gave up, but The Harps were not for easing up either as wing back John Prior got in on the scoring act, sending over a massive point from distance. The final whistle sounded shortly after to leave a full time scoreline of The Harps 2-18 Casltetown 0-10.

Great credit must go to players, management and supporters alike as the club never lost focus after the disappointment of exiting the championship proper. We showed in this game that our flagship team are well capable of hurling to a high standard, and maybe with a bit more luck next year we can make inroads in the championship. 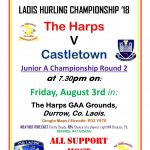