The Harps U13s win out Championship 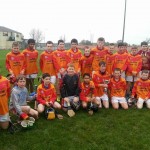 Congratulations to the Harps U13 Hurlers who had a great win in the championship earlier this month. In the group stages of the competition they beat Naomh Eamonn and St. Manmans which qualified them for the semi final as group winners. Na Fianna were the opposition here and after a hard fought game the Harps came out on top by seven points. Abbeyleix were the opposition in the final and went in as favourites having won all their games by large margins. The afternoon of the final was wet and windy with the Harps playing with the advantage in the opening half. Abbeyleix got in for a soft goal in the opening five minutes and at that stage the signs weren’t good.
However, the players soon settled and went in at half time four points up after great goals from Pauric Walsh and Jim Kirby. With the wind in the second half Abbeyleix pressed hard but with Billy McEvoy outstanding at full back scores weren’t easy to come by! A point from Mikey Monaghan with five minutes to go restored a four point lead and from there to the end they maintained that margin. On the final whistle there was great celebration with all thrilled with the hard fought victory on a 2-07 to 1-06 scoreline. Laois Development Officer Andrew Kavanagh presented the cup to captain Daire Quinn after the game. This victory augers well for next year with all looking forward to the U14 games in 2015. The team will be presented with their medals in the near future.
PANEL: Lorcan Fitzpatrick, Thomas Walsh, Billy McEvoy, Ben Dunphy, Ciaran Shortall, Daire Quinn, Tiarnach Doheny, James Duggan, Aaron O’Grady, Conor Delaney, Ciarán Burke, Pauric Walsh, Mikey Monaghan, Jim Kirby, Mark Deegan, Bill Phelan, Lee Coffey, Patrick Daly, Emmett Moore, Rian Edwards, Mark Holland, Jack Murphy.
Development Project: The Harps GAA Club are delighted to have begun ground-works for the new development project that was announced recently for the club grounds at Durrow. 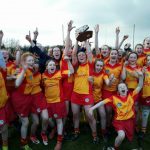