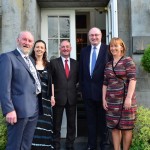 The efforts of Durrow Development Forum in recent years to raise funds for the rejuvenation of the town Square have been well noted. The small town, home to the Durrow Scarecrow Festival, has a very active community forum (DDF) which has been working alongside Laois County Council for the last number of years in an effort to upgrade the local square and enhance the wonderful green amenity at its heart. As with many other community projects, the lack of funding has been a source of uncertainty.
However, the persistence of the DDF paid off, when on Thursday last, at a gathering in Castle Durrow, Minister Phil Hogan announced that €300,000 has been allocated to the project. With partial funding already in place, the fund for the project now stands at €750,000 which will ensure that the project can be undertaken as planned. At the gathering, which was also attended by newly appointed Minister Charlie Flanagan, Peter Carey, County Manager- Laois Co.Co, elected local representatives Cllr. John Bonham, Cllr. John 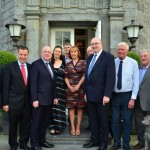 King, Cllr. Marty Phelan, Cllr. David Goodwin and Fine Gael Candidate John Finlay and DDF representatives Evelyn Clancy and Marian Mahony; Minister Hogan commended the work of the local community group in getting the project to this stage, and stated that the drive and determination within the community of Durrow, to get the work done was a deciding factor in the allocation of funds.
On behalf of Durrow Development Forum, Evelyn Clancy, Chairperson sincerely thanked the Minister for the funding, for which the community are very grateful. Evelyn also paid special thanks to County Manager Peter Carey and Laois County Council for the vast amount of work which they have carried out to get this project to this stage. Evelyn also thanked Cllr. John Bonham who has assisted the DDF greatly and has been a huge support during the process. Work on the project will start with immediate effect.