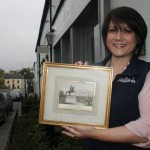 Sheppard’s is proud to have been entrusted with selling thirty-three letters written by Jacqueline Bouvier Kennedy to Fr Joseph Leonard, a Dublin, Ireland based priest. Written during the key years 1950 to 1964, the unpublished personal correspondence covers seminal events that include her engagement to Senator Kennedy and his assassination in 1963. Alongside the 33 letters, Sheppard’s will also be offering 21 lots of Jacqueline Bouvier Kennedy associated correspondence and photographs at Sheppard’s Irish Auction House, Durrow on 10 June 2014 at 5.00pm. Today’s Irish Times reports…

The archive titled “Jacqueline Bouvier Kennedy: Letters to Fr Joseph Leonard, 1950-1964” contains more than 30 (mostly handwritten) letters. They will be sold in a single lot in an auction of rare books and manuscripts in the saleroom of Sheppard’s Irish Auction House at Durrow, Co Laois, on June 10th. Auctioneer Philip Sheppard said he anticipated interest especially from the United States and expected the archive to sell for “in excess of €1 million”. The estimate is between €800,000 and €1.2 million. He described it as the “most most significant lot ever to be offered at auction in Ireland”.

The auction is expected to gather huge international interest. Congratulations goes to Sheppards Auction House, Durrow on securing the contract to auction the consignment.