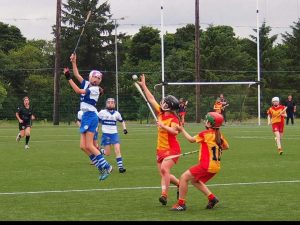 Ahascragh / Caltra was the destination last Friday morning for the Harps U14 team and mentors. With three group games to play the Harps were straight into action Their first game on Friday evening was against the Galway side Killimor. Harps were strong throughout the game winning on a scoreline of 8:04 to 1 point. Scorers: Lucy O Connor 6.2, Rachael Dollard 2.0, Rachel Deegan and Amy Lacey 0.1. Their second game was against Roscrea. This was a tougher encounter but Harps outplayed the Tipperary side winning 5.05 to 1 point. Scorers: Rachael Dollard 3.0, Lucy O Connor 1.4, Amy Lacey 1.1.

The Harps third game took place Saturday morning against their host club Ahascragh/ Caltra. Harps were without their sharpshooter Lucy O Connor for the first half and Ahascragh/Caltra were consistently testing the Harps defence. Una Brophy kept the Harps up with a point from a free but it wasn’t until Lucy returned that the Harps extended their lead finshing the game 1.03 to 2 points. Scorers: Lucy 1.2, Una Brophy 0.1. This win secured a place in the Cup Quarter Final later that day.

Harps were consistent with their work rate all over the field demonstrating what a well rounded team they are finshing that game 3.06 to 1 point. Scorers: Lucy O Connor 3.3 Katie Healy 0.1 Rachel Deegan 0.2.

Connaught G.A.A centre was the venue Sunday morning for the semi final. The Harps support was increasing steadily throughout the weekend with a great support present Sunday morning for the girls. Kinvara were a good side and tested the backs again and again but up front they were not able to handle the Harps forward’s unrelentless work. Half time score was 3.2 to 1.0 with Harps up. Kinvara came back in the second half with great determination and scored a well worked goal on the restart. However up front again the Harps showed dominance and worked back three goals until Kinvara scored one more leaving the girls finshing comfortable on a scoreline of 6.3 to 3 goals. Scorers:Lucy O Connor 4.1, Rachael Dollard 2.0 Lisa Kirby and Una Brophy1 point.

After an hour of a delay the game finally commenced at 4.30pm. In the opening minutes a lot of play remained around the middle third of the field with both teams showing their intentions. Harps had an attempt at goal denied early on and St Vincents were denied the same at the other end thanks to good pressure from the Harps defence. However on form Lucy wasn’t finshed her weekend scoring yet and in the fifth minute, upon receiving a pass from Lisa Kirby, sent a rocket in past the keeper to open the scoring. Harps 1 goal to no score. Cara was called upon in the ninth minute, pulling off a great save. It wasn’t until the eleventh minute that the Dublin side opened their scoring with a point from play. Half time score: Harps 1.0, St Vincents 0.1.

The Harps girls returned to a joyous homecoming in Durrow and Cullahill on Sunday evening . The club would like to thank everyone who travelled west and those who helped make the homecoming so special. Special thanks to Aylwards for driving the girls around the towns.

Competition: The Harps Camogie Club are running a poster/display/sign competition. The best sign on display in Cullahill and Durrow will receive €50. (One winner from Cullohill and one from Durrow). Free entry. Please send a photo of your entry to Harps Camogie via messenger on our Facebook account or through WhatsApp on (087) 6334619. 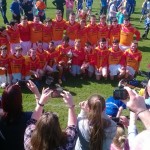