The Harps Junior hurlers dream of championship glory ended last Friday, August 19th when a strong SlieveBloom team knocked them out of the championship. Played in Shanahoe, SlieveBloom opted to play with a strong wind at their backs in the opening half. The Harps however got off to the dream start when a long range free from Danny Delahunty went all the way to the net. Stung into action by this early setback, SlieveBloom began to assert themselves and hit a string of points from play and free’s to take the lead. With 20 minutes played, Laois Senior Hurler Ben Conroy went on a strong run before blasting to the net. The Harps replied with a Ross Young free to leave five points between the team and with The Harps defending strongly the deficit wasn’t overly worrying with wind advantage to come after the break.

SlieveBloom weren’t paying much attention to the script though, as they picked up their dominance in the second half also. Dropping back an extra defender, SlieveBloom proved very difficult to break down, and with some very fast forwards they continued to pick off scores. Some converted free’s from Young kept The Harps just about in the game, but the goal that The Harps needed to really get back into this game never came. The game threatened to boil over at times, and The Harps were dealt a further blow when Fintan Deegan was sent off with 5 minutes to go. Pushing forward in search of a goal, The Harps were caught on the counter when another scorching run and a pass by Ben Conroy resulted in SlieveBlooms second goal. The Harps tried to the end, but on the day Slievebloom were the superior outfit and the final score read SlieveBloom 2-13 The Harps 1-05.

This was a very disappointing exit for the Junior hurlers who will feel they had a whole lot more in them. 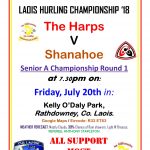 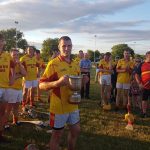 Cúl Camps next week followed by Championship Hurling Opening Round