Abbeyleix condemn Harps to Senior A Hurling for 2017

The Harps flagship team will ply their trade in Senior A in 2017 as they lost out to Abbeyleix by a single point in this relegation final last Sunday. Played in miserable conditions, Abbeyleix opened with the wind at their backs and had their first point registered inside a minute. The Harps reply was swift as Mick Lanigan fired over a free. The sides trader another point apiece as Lanigan hit a fine point from play against the wind. The Harps now began to dominate and they hit the next four points in a row (Brophy, Clancy, Lanigan 0-2f) to leave themselves in a very favourable position.

That old failing of conceding free’s rose it’s head again however as Laois net minder Enda Rowland sent over some huge free’s to keep Abbeyleix in touch. Disaster struck with 5 minutes to go when a monster Rowland puckout broke kindly for an in-running Abbeyleix forward who gave Peter Walsh no chance in goals. Points were traded again as Lanigan converted a 65’ and now amazingly The Harps were a point behind at the break when they really should have been 4 or 5 points in front. The half time score read Abbeyleix 1-06 The Harps 0-08.

The first 20 minutes of the second half would ultimately seal The Harps fate, as their ravenous rivals hit four unanswered points (0-02f) to open up a five point lead with just 10 minutes left on the clock. A Kieran Freeman effort from play was answered with interest as Abbeyleix added another two points from play to leave The Harps with a mountain to climb as they trailed by six points with just three minutes left to play. Our hurlers were not about to throw in the towel however, and renewed efforts were rewarded as Gavin Dunne sent over a good point from play before the excellent Eoin Clancy lashed the sliotar to the net to bring this game right back into the melting pot. Another point from Lanigan reduced the deficit to a single point but unfortunately time was not on our side as the final whistle sounded to the ecstasy of the Abbeyleix contingent but to the agony of The Harps.

It is back to the drawing board now for The Harps, and they must take stock and look at how Ballinakill and Portlaoise have both responded to similar set backs in recent years. A huge thank you is owed to David Cuddy, Martin Brophy and Gabby Irwin who have left no stone unturned in this teams preparation. Credit also to the panel of players who have been very unlucky to come out the wrong side of some incredibly close games. 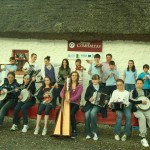 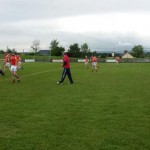