String of successes for Avril Deegan 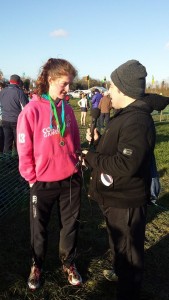 Avril Deegan competed in Dunboyne on the 17th of January in the Leinster Junior Cross Country Championship which was ran in conjunction with the International Junior and U17 Celtic Games with teams from Northern Ireland, Wales, Scotland and Ireland taking part. Avril running as an individual was the first Irish girl to cross the line beaten only by a very strong Scottish team and claimed gold in the Leinster Junior Championship. Almost a clean sweep for Avril in the Leinster Cross Country this season with gold in U18, silver in U17 and gold in the Junior. A remarkable achievement.

Sunday 24th saw the start of the Indoor Track and Field season at the Athlone International Arena. Avril ran against a top class field of Irish International runners and ran a brave race to claim silver in the Glo Health All Ireland Junior Women’s 1500m final. It takes something special to make the podium at this level and this is testament to the hard work been put in by Avril. Avril ran again in Athlone in the afternoon narrowly missing a place on the podium coming in 4th in the 800m race. A fantastic start to the indoor season for Avril.

Avril headed to Dungarvan on Friday the 30th to compete in the East Munster Schools Cross Country Championship representing the Presentation Secondary School in Thurles. Avril gained control of the race from the start and claimed the gold medal. There is no let up for this young athlete as she heads to Cork this weekend to compete in the Munster Schools Cross Country Finals along with the Leinster Indoors in Athlone. We wish Avril continued success and congratulate her on her achievements so far in 2015. 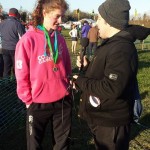