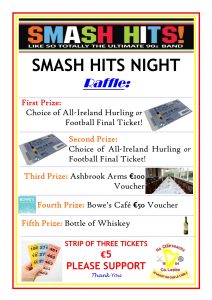 Upcoming Hurling Fixtures: This Sunday March 12th at 2.30pm Kinnity come to The Harps GAA grounds in Durrow for the second round of the Leinster Hurling League. Please come along in large numbers to support the lads. Following this game, The Harps travel to Clonad for the first round of the League on Saturday March 18th at 4pm. Finally, on Wednesday 22nd March at 8pm the final group stage of the Leinster League will be played under lights in Heywood against Dunamaggin.

Smash Hits Night: This Saturday, March 11th The Harps GAA will hold a fundraiser in Lennons Venue, Durrow. The massively popular Smash Hits group will perform songs that have thrilled audiences all across the UK and Ireland on the night. A raffle on the night will see some fantastic prizes to be won…

Annual County Board Draw: The Harps GAA Club would like to thank everyone for their support in the large uptake of tickets. Unfortunately we had no winners in March, however there are still three draws remaining – April, May and June and hopefully some of our supporters will strike it lucky!

Juveniles: The Nursery Programme for Junior and Senior Infants Boys will continue on Sundays in Cullohill Community Centre from 12pm until 1pm.