U12 Camogie Team through to 2016 League Final

The Harps U12 Camogie team will take on Naomh Eamonn in the semi final of the league this Saturday 10th September (please see Harps Camogie Facebook page for the result!). They have had a successful league campaign so far winning all nine games and topping the table. Along the way they have beaten St. Brigids, Portlaoise, O’Moores, Clonad, St. Lazarians, Clough Ballacolla, Camross and Banrion Gaels with Naomh Eamonn conceeding. The girls have worked extremely hard all year under the guidance of their trainers Padraig Henderson, Kay O’Connor and Joan Dollard. After being beaten by a single point in last year’s final against Camross, the panel and management have been doing over and above to ensure the cup goes to Durrow/Cullahill this year. Portlaoise take on Camross in the other semi final which is sure to be a cracker of a game.

Update: Since this article appeared in The Durrow Parish Newsletter the U12 Team have won their semi final on a scoreline of 5-05 to 1-01. They now will play Portlaoise in the final at Mountrath on Sunday 18th of September at 12noon. 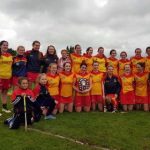