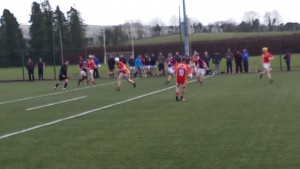 A little bit of Harps GAA Club history was written today as the first side to compete in Leinster Championship Hurling took to the all-weather pitch at Heywood Community School in Ballinakill. A fine, but cool afternoon greeted both sides onto the sublime field to mark the start of what was the second Leinster Semi-Final Junior B Hurling game – O’Loughlin Gaels, Kilkenny had beaten Kilmore of Wexord in the 1pm encounter. A good vocal support from both sides was present encouraging their respective teams on in what was a very sporting game of hurling.

The Harps Junior B hurlers narrowly lost out to Clarinbridge of Galway as two goals in the space of two minutes in the first half proved costly as The Harps ran out of time in this exciting semi-final. Clarinbridge got off to a strong start stringing four points together in the first four minutes before Colm Dunphy opened The Harps account with a pointed free in the 6th minute. The Galway side responded strongly shooting 2-02 from play with the lively Colm Dunphy and Shane Fitzpatrick sending over a point each to keep The Harps in the game. The Harps management changed things up introducing Aaron Dunne and Tommy Dillon for William Dillon and Brian Farrell respectively. Switching Shane Fitzpatrick back as a spare defender also worked well as The Harps for to grips with the Clarinbridge forwards. A well worked point from play by Albert Townsend closed out the half which left Clarinbridge with a 2-06 to 0-04 lead. 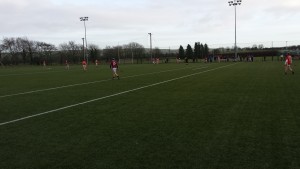 A lively start to the second half for The Harps was essential if they were to stay in touch and 0-2(0-1f) from Colm Dunphy and a long range free sent over the bar by Ciaran Costigan cut the lead to 4 points. Clarinbridge pointed from play but at this stage The Harps were now the dominant team and an excellent point from play by the hard working Darren Maher was followed by a pointed Shane Fitzpatrick free to move The Harps closer. The scores were flying over at this stage as Clainbridge again pointed from play only for Shane Fitzpatrick to send over another two frees.

The game was really in the melting pot at this stage and the next score would be crucial. To their credit Clarinbridge strung together some great attacking play to fire over from play to give them a four point lead. The Harps were going to need a goal to win this but it was not to be as wave after wave of attacks were repelled by the rock solid Clarinbridge full back line. The impressive David Doheny launched over a super point from wing back but unfortunately this was to be the last score of the game for The Harps. A pointed free in the 31st minute for Clarinbridge gave them a very hard fought four point win.

Great credit must go to both sides for serving up such an entertaining game at this time of the year and it bodes well for The Harps Junior team for the coming year. Best on the day for The Harps were Justin Brophy, Cathal Phelan, Shane Fitzpatrick, Darren Maher, Colm Dunphy.

Management’s Thoughts: Speaking to theharpsgaa.com after the game the management team felt that The Harps could have won this game owing for a slow start that cost the side dearly. They paid credit to the referee – John Healy of Clare County who was fantastic on the day adding to the sporting occasion. Clarinbridge were also highly praised for being very sporting opponents and thanked them for accepting the invitation back to The Castle Arms Hotel for refreshments following the game despite their 2.5hr long trek ahead of them. The management team wished Clarinbridge well in the final next Saturday.