Home » Archives » You are reading »

COMPILED BY THE DURROW SCOUTS

Prayer like a plough stirs up the soil of our soul,
Enriching, invigorating, praising, pleading, pondering,
The wonders, worries, work of man, of mortal moments,
Moved magnificently in time.
Into the presence of Our Lord Jesus Christ,
And in prayer we dare to be moulded by his might,
To do all that is right in His sight.

At the February meeting of Durrow Community Council a minutes silence was observed as a mark of respect to the late Thomas Bowe. Sympathy is extended to his wife Carmel and the O’Brien and Bowe famalies.

The Senior Citizens Party will take place on Sunday 23rd February in The Castle Arms Hotel. Invitations are currently being distributed.

A car wash day will be held in the Esso Station on the Abbeyleix Road on Saturday, 22nd February. All proceeds from this will go towards the Senior Citezens Party fund. A cup of tea/coffee will be available while you wait. Thanks is extended to Jackie Daly for being so generous.

FAS 7 is due to commence on March 3rd. Fifteen people plus a supervisor will be employed on the scheme. Cullohill will join Durrow in the forthcoming scheme, where three people will be employed.

Next draw on Monday 17th February in O’Connell’s Cullohill.

The Annual General Meeting of the lotto will be held in the Castle Arms Hotel on Tuesday 25th February, at 8.00 p.m. All participating clubs are asked to have two representatives at the general meeting.

SYMPATHY is extende to the Casey family, Derry Road, Durrow, on their recent bereavement.

SYMPATHY is extended to Mrs. Carmel Bowe, Derry Road, Durrow, on the death of her husband Tommy. Also to the Bowe and O’Brien families.

SYMPATHY is extended to the Walsh family, 18 Erkindale Drive, Durrow, on the death of Betty’s aunt.

Durrow Macra Na Feirme recently held a Table Quiz in Gerri’s Bar. It was well supported. We wish to thank everyone who took part. Thanks to club President, David Tynan who read out the questions. We would also like to thank all the people who sponsored prizes for the raffle. And last but not least, we would like to thank Gerri’s Bar for allowing us to hold the table quiz there, and also for giving out sandwiches on the night.

On Friday 10th January, 25 of our Cubs were invested in the Presentation Centre. The night began with Mass celebrated by Fr. Tobin. Each cub participated in the Mass. Following Mass we had the Investiture of the Cubs. Justin Maher, Regional Officer, Kilkenny and Theresa Donohue, Cub Leader, performed the ceremony. We also had two Leaders to be invested – Bridie Dunne and Veronica Dunne. Martin Wals, Group Leader and Justin Maher invested the Leaders into the pack.

The Cubs had a Carol Service at Christmas, to raise funds for the Laois Hospice. Mary Donohue and Liam Holohan, representing the Laois Hospice, were invited on the night to receive a cheque for £76.

The parents who attended along with our invited guests enjoyed refreshments at the end of the evening. The Leaders and Cubs would like to say a special thank you to Fr. Tobin, Justin Maher, Martin Walsh, Mary Donohue, Liam Holohan and the parents.

On Saturday 22nd February a Car Wash Day – all proceeds will go to Durrow Community Council, towards the Senior Citizens Party on Sunday 23rd.

We will have a draw every day and the draw for the T.V. will be held on Saturday 22nd.

For all your Video Rentals. A large selection in stock including Independence Day, Flipper, The Rock, Mission Impossible, Screamers, Copy Cat, Heaven’s Prisoners, City Hall, plus a large selection of children’s videos. Rent by phone – 36411.

TABLE QUIZ will be held in the Nore Nets on Friday 21st February at 9.00 p.m. Quiz Master: David Finnegan. Valuable prizes for all winners. Proceeds of the Table Quiz will go to the Lions Soccer Club.

CONFIRMATION will be held in Durrow on this Sunday at 11.00 a.m. Say a special prayer for the 72 children from our parish who will receive the Sarcrament. They are wished a very happy day.

FOUND: A large bunch of keys, in the Badminton Hall, Durrow. Contact 36312.

THE POLIO FELLOWSHIP OF IRELAND wish to thank everyone who supported their recent Church Gate Collection, which came to £131.11p.

THE CHILDREN’S HOSPITAL, CRUMLIN wish to thank all who supported their Christmas Draw.

The Junior Branch will hold it’s Annual General Meeting on Monday 24th February at 8.00 p.m. sharp. All members and intending members are asked to attend this very important meeting.

The second round of the Eddie Moore memorial Sheild will be held on Monday 17th February – Theme “Dramatic Skies”.

Plans for this years Durrow Summer Camp 2 is now under way and vacancies still exist for students to take part. The Summer camp will run for six weeks, from 7th July to 15th August, and the students will be needed to take part in the full six weeks. Students who are eligible for the Student Summer Jobs Scheme will be taken on. Names to Mary Walsh osr Angela Drennan as soon as possible.

Harps GAA Club are holding a Benifit Night in O’Connell’s Pub on Friday 21st February. Your support will be much appreciated.

The Harps Development Fund Committee are holding a Fashion Show in the Castle Arms Hotel, Durrow on Friday 7th March. Subscription £5. Door prize on ticket. The show will commence at 8.30 p.m.

The Harps Camoige Club AGM was held on Tuesday last in Cullohill Community Centre. The following committee were elected;

First Training session will be held on Sunday March 2nd at 3.00 p.m. in Cullohill. All to attend.

Tickets are on sale for our Development Draw, £20 each, and can be got from all committee members. Prizes include a Holiday for 2 in Spain, Weekend for two in Ryan Hotel, Ferguson Colour TV, Video Recorder and lots more, The draw will be held on Easter Sunday night in O’Connell’s, Cullohill.

Joe Kenny will broadcast a programme on Cullohill and surrounding areas at 9.00 p.m. on Tuesday 18th February, on Radio Three.

Set Dancing classes will resume in Cullohill Community Centre, for children, on Saturday mornings at 11.30 a.m. The teacher will be Eddie Cleare.

Lions B team continue to top the Division 1B table and are now eight points clear with six games remaining. On Sunday last they travelled to St. Canices, their main rivals in the league and an excellent goal by Philip Monnelly earned them a 1 – 1 draw.

The Lions A team were defeated 2 – 0 by Thomastown United in the Premier League.

The Lions U/13 team had a 4 – 1 victory over Ajax in the league. Scorers: Patrick Bowe, Tony Woods, James Campion and Richard Grogan.

The U/16 team lost by 3 – 0 to Highview Athletic and the Youths lost 3 – 1 to Evergreen. Great credit is due to players and trainers of the schoolboys teams, who are providing great service to the club. The U/13 team are leading their league and are unbeaten in all games.

The final draw in the Lions Soccer, South East Draw, will take place on Friday 21st February. The draw will have 54 prizes plus extra draws for fully paid up members, prior to the last draw. All monies to be paid by Monday 17th February. Best of luck to all ticket holders.

Three local fishermen competed in the Pike Qualifier for the Irish Teams in Ballinasloe on Sunday last. While not qualifying for the team, they finished very well and are unlucky not to be on the team.

Joe Fogarty caught the heaviest pike of the day at 8 lbs 5 ozs, and caught two other fish. Mick Nolan caught three fish with a big weight of 13 lbs. Noel McKenzie caught one fish at 7 lbs 9 ozs.

The Annual General meeting of Durrow & District Anglers will be held in The Durrow Inn on Friday 21st February at 8.30 p.m. sharp.

SYMPATHY is extended to the Roberts family, Graiguevoice, Cullohill on the death of Ned Carroll and Bride Murphy (nee Roberts) Dublin. 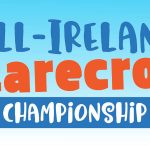 Deadline for entries to the Scarecrow Championship 2018 Details 🗓 🗺 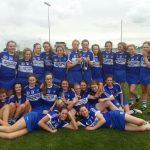